Woah!  That came out of nowhere.

Yushin has gone 3 and 3 in his last 6 fights, but in those last 3 fights, he’s gone 2 and 1.  What gives?  Apparently, Dana White says it’s just a case of the UFC having too many fighters on their roster.  In Okami’s case, I get the feeling he is too expensive to keep around considering his last three losses have been TKOs and his last three wins have been decisions.

Still, it’s hard to believe the UFC released Okami considering the praise Dana White heaped on Okami in 2011, calling him “the best fighter to ever come out of Japan.” Somewhere in Japan, Kazushi Sakuraba could be heard chuckling.

The guy is a proven test builder for anyone coming up in the 185 division.  He’s a very difficult out for anyone in contention at that class, and for a division with some new life in it with Anderson now dethroned, this is an odd choice for a cut.

He’ll likely be back, so I won’t pout too much. You don’t put together a 7-year run in the UFC and have them not remember you.  With Vitor, Tim Boetsch, and Alan Belcher being injury prone and Hector Lombard dropping to 170, I have a feeling Joe Silva will be calling pretty quickly.

Of course things could have been worse for Yushin Okami.   He could have been shot to death by Chael Sonnen’s mother.  Seriously.  Listen to Chael tell the story here on Dana’s vlog (starts at 1:20).

I think if the UFC could have promoted Yushin’s friendship with Chael more, more people could have seen what Yushin was about in addition to his cage performances.  Or they could have milked it into a buddy-cop-“East meets West” movie.  Chael loves the camera.

You heard it here last week.   It’s not an anomaly.

Roxanne Modafferi is such a breath of fresh air from the usual ridiculous TUF choices to come out of central casting.  She draws.  She teaches Japanese to fellow competitors.  She does arts and crafts.  Well, I guess she’s not the first to do arts and crafts in the TUF household, but she is definitely unique, and that makes her so endearing.  It also makes it that much harder to watch the ending to her fight against boxing vet Jessica Rakoczy.  Unfortunately, it’s not the first time I’ve seen this happen to the Happy Warrior:

Does a fighter need to be aggressive and have a mean streak to be successful?  I don’t know.  I’m a fan of Roxy and appreciate that she is who she is.  What I do know is that it is hard to watch someone who is genuinely likeable get clobbered.  Also, adding some salt to the wound is the fact that, like Shanya Baszler, Roxanne is a seasoned vet.  She is someone who has worked hard and fought all the toughest competition to get where she is.  Unlike Baszler, however, Roxanne comes off as very humble, so to see her get mauled by Jessica Rakoczy was hard to watch.  Injury was compounded by insult when the referee, who could clearly see Rakoczy grabbing the fence repeatedly, apparently had a stroke and lost his vision and could not see that Roxanne was in no position to defend herself after she received a slam that eerily resembled Sarah Kaufman’s finish against Roxanne in Strikeforce.

Seeing Baszler and Modafferi consoling each other was a pretty epic sight.  It says a lot that two of the most experienced fighters in the house have been defeated, seasoned vets who have fought around the world.  It says there are no guarantees.  But does it say that the time for these vets has passed?  Does it say that these pioneers in women’s MMA, who have been toiling in promotion after promotion making their bones and reputations with any fight they can get, are closer to the downside of their careers?  Or does it say that the younger fighters coming up, those looking for UFC success and those within Invicta who have based their training in MMA as a discipline on to itself, owe their success to their foremothers in the sport?

It would be a shame to think this is the last we’ll see of Modafferi and Baszler in the UFC, and hopefully, both can find themselves on the UFC’s roster when this is all said and done, if for nothing else, at least for the finale.  The UFC’s women’s division is threadbare and needs quality fighters to fill out the division and make things more competitive.

In any case, the story behind this season’s TUF, and the women’s fights in particular, continue to compel, and I look forward to seeing the next women’s matchup and how the vets handle being in the house when nothing else for them is on the line. 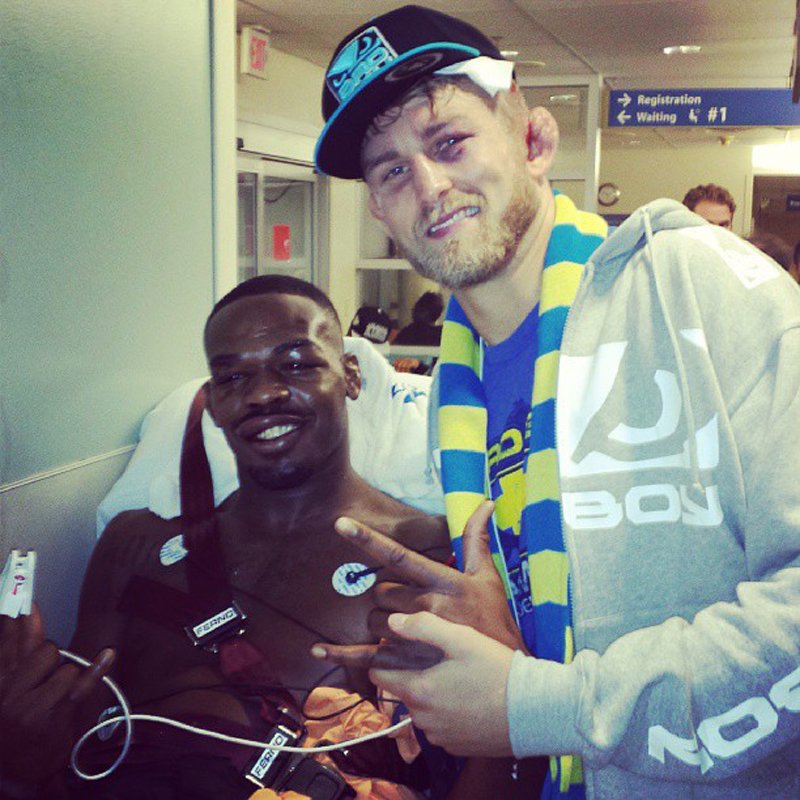 This is what a convincing wins resembles.

Whoever is fighting Jon Jones next, take one step forward.  Not so fast Alexander Gustafsson.

Well, I can’t say I’m not disappointed, and it does come off as a bit of a surprise given the overwhelming positive response to their initial match up, but word broke overnight from Brett Okamoto that Jon Jones’ next opponent will be Glover Teixeira and not a rematch with Alexander Gustafsson.

Jones was heard to have said after their match at UFC 165 that Gustafsson deserved a rematch.  However, he then said he watched the fight “over 10 times” and feels that he won decisively and is ready to move on.

Because it’s Jones, and his ego and attitude, it’s easy to say that this is him ducking a fight against an opponent who finally has his number.  However, to Jones’ credit, the guy has never backed down from an opponent put in front of him (except for that time with Chael Sonnen, but those were under truly unusual circumstances).   And, it can be argued he’s had a far tougher test in his title defenses than just about any other UFC champ in the company’s history.

I would have doled out another $60 to see a rematch between Jones and Gustafsson, so as a consumer, it’s disappointing these two won’t be locking horns.  However, I’m torn because what do you do with Glover if Jones and Gustafsson have the rematch?  Glover has earned his shot. Should he be asked to wait or fight someone else until these two settle things once and for all?  For all of the critics who balk at “undeserved” title shots (like Chael and Vitor getting shots against Jones at 205), do they now stick to the guns and back the decision to give Glover a shot despite the fact that Jones/Gustafsson is widely thought of as fight of the year and despite the fact that many are clamoring for a rematch?

I think Gustafsson may be more hurt than what has been reported and needs a little time to recover.  I also think the UFC didn’t expect much from Gustafsson.  Now that it has a potential rivalry on its hands, it can take its time, build it up, and promote it to squeeze every dollar out of it.  Have Jones fight Teixeira.  Have Gustafsson fight Rashad Evans, Dan Henderson, or Phil Davis. Then, start to craft the narrative for the rematch over the course of the next 6-8 months.

Of course, it’s all a crap shoot.  Jones could lose.  Gustafsson could lose.  Suddenly, the shine is off the rematch if there is no title at stake.  The only real winner is the UFC.  If Jones continues his winning streak, he is labeled P4P best and continues to sell PPVs, Gatorade, and Nikes.  If he loses, the company would likely make the rematch with Gustafsson sooner so as to not lose any more money.   Or, it starts to craft the narrative around a friend versus friend match with Phil Davis and Gustafsson going head-to-head.

From there, what does Jones do?  His barn burner with Gustafsson shows that he may not be quite ready for a jump to Heavyweight.  If anything, what UFC 165 showed me is that Jones may have carved up the 205 division, but he is human.  His reign has given time for future contenders to grow and mature, so at the end of the day, maybe moving on to Glover Teixeira is the best move for both Jones and the UFC.  And if worse comes to worst, it still has Gustafsson in its back pocket for a rainy day.

So Tito is threatening, and maybe that’s not the best choice of word, to crash the UFC’s 20th anniversary show.  The show in question is UFC 167: St-Pierre vs. Hendricks being hosted at the MGM Grand Garden Arena in Las Vegas, Nevada.

It is awfully generous of Tito to offer to pick up the nickel for tickets for himself, Rampage, Randy Couture, and the Shamrocks. UFC tickets can be pricey, especially for really good seats.  However, if he’s really thinking of an invasion, WWF/WWE style, he should look into include Eddie Alvarez and King Mo.  King Mo is already entrenched in pro-wrestling, and maybe he can get Kurt Angle in on it, too.

Of course, including more fighters is likely to get more expensive.  And it seems really weird and confusing that Tito would pay for a UFC ticket (or in this case five), essentially giving Dana White money when Tito himself inferred Dana was a slave driver.  I guess if I was Tito, I wouldn’t want to give a guy who oppressed me one stinking dime.  But Tito is a master strategist, promoter, and billionaire, so he knows better than me.  However, if he’s looking to save money, I guess he could just wait until Dana tweets free tickets for the event and hope for the best.

The really odd thing is that there hasn’t been a mention of the UFC doing anything special to commemorate the event.  So in a sense, there is no real party to crash.  The UFC has never been a company to look back and reflect.  I actually think that’s one of the things in which the UFC is lacking.  They don’t make their hall of fame events live, they don’t discuss the SEG era, and they rarely look back at significant fights, cards, or fighters.  Seeing some pioneers from the silver age of the UFC might be a nice way to acknowledge where they’ve been as a company and where the sport has been.

At the end of the day, if Tito’s stunt gets Frank Shamrock back into the UFC, even as a spectator, by hook or by crook, I’m for it.